Gethin Bennett (LLB 2015, PgDip 2016) is running the Cardiff Half Marathon in October in memory of his father, who he lost to depression in 2007. Gethin caught the running bug whilst studying abroad in 2016 and has run the half marathon twice previously. He shares his tips for those thinking of getting into running as well as what he’s looking forward to on the day.

I started running when I was on my Erasmus year abroad in Toulouse, France (way back in 2016). I was overweight and unhealthy then, and so decided one morning to sort it out – beginning with long walks, then progressing to light jogging, and finishing with catching the running bug.

Since then, running has been my tonic (well, the non-gin type at least!) for relieving stress, getting that endorphin boost, and looking after my health (both physical and mental) and wellbeing generally.

This will be my third Cardiff Half Marathon, and, for the last two occasions, I fundraised for Mind. We sadly lost my dad to depression in 2007 when I was 14 and, over the last few years, I’ve tried to raise money where I can, to support mental health charities and organisations.

Being a Cardiff University alumnus, I remember receiving the e-mail saying that this year’s support would be dedicated in part towards mental health research – so it made sense that I signed up and supported my old stomping-ground this year!

Exams and coursework aside, I have nothing but great memories of my time at Cardiff Uni – and I really do miss those days. I’m from West Wales, so Cardiff was the perfect balance of being close enough to home for the occasional washing drop-off (thanks Mam!), but far enough away to benefit from my own independence in a great city. Since graduating, I’ve stayed in Cardiff, and couldn’t imagine living anywhere else.

In terms of fundraising, for me, the key was word-of-mouth – particularly on social media. The more I could share the message on Facebook, Twitter, Instagram, and LinkedIn, the more I saw those pound-signs jump up and up. It also helps having a huge family!

I’m lucky to work for an organisation which really promotes mental health and wellbeing and be surrounded by some great colleagues – so I’ve had nothing but support and cheer from my work mates, which has really helped with both my fundraising and training. 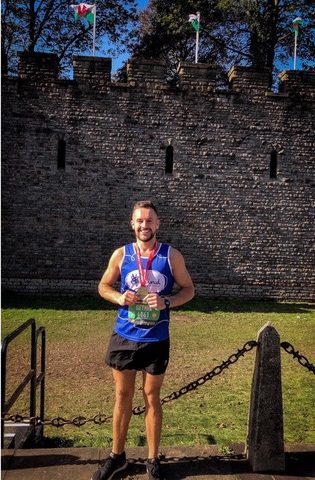 The support from Cardiff University has been nothing short of fantastic! I get regular e-mails from the team sharing tips, encouragement, and general support in the run up to the race. It’s made the fundraising process (and morale-boost) much easier!

If you’re a new runner or thinking of signing up to a race, I think the key is to take things slowly. It’s a cliché as old as time, but for good reason – don’t run before you can walk! There are plenty of great (and free) guides online, with suggestions on what distances to run and when, in the run-up to the Half Marathon.

As with anything, you’ll find that the longer and harder you practice, the more progress you’ll see. It’s hard to beat the feeling of pride in realising how far you’ve come since being only able to run a few kilometres with stop-starts!

I’m really looking forward to crossing the finish line. I really love the buzz and atmosphere of the day. Compared to my usual running route (which normally involves sheep as spectators), it’s great to see hundreds of supporters gathered on the side-lines cheering you on – and the free jelly baby hand-outs certainly help! In fact, as well as jelly babies, on the last stretch of the 2019 Half Marathon, a very kind student on Cathays Terrace gifted me a cold can of lager – great for the thirst, but not so great on the stitch front once I crossed the finish line!

If you are considering fundraising for Cardiff University research, do it! Obviously, raising money for any charity or pro-bono organisation is fantastic, and University research is no different. I’m looking forward to seeing the end-results from the team’s hard work.

You can support Gethin’s fundraising through his JustGiving page. Interested in running Cardiff Half Marathon in 2023? Register your interest.

#TeamCardiff fundraising supports Cardiff University’s neuroscience and mental health, and cancer research. By supporting the next generation of researchers, you can help accelerate life-changing discoveries to improve prevention, diagnosis, and treatment for people living with a wide range of conditions.