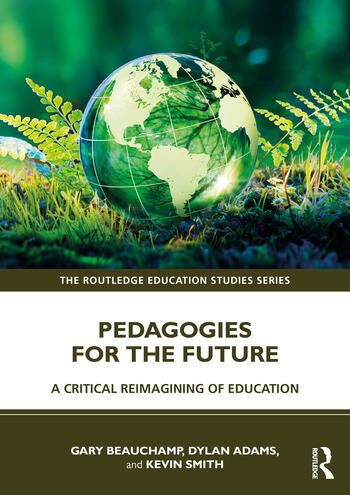 In an earlier post, I discussed the first chapter in a recent book I co-authored with Dr Dylan Adams and Professor Gary Beauchamp called Pedagogies for the Future: A critical re-imagining of education. My contribution to the book largely focuses on making connections between ‘thinking philosophically’ and pedagogy, and discussing ‘radical’ approaches to education. The previous post focused on ‘thinking philosophically,’ so now it’s time to ‘get radical.’

What is Radical Pedagogy?

“What do you think about when you hear the word ‘radical’?” That’s one of the first questions I ask my students on my third year module Radical Education. More often than not, they reply with comments referring to conflict, intolerance, terror and ‘extreme’ political perspectives. The origins of the word ‘radical’ provide a different definition. ‘Radical’ originates from the Latin word radix, meaning ‘root’ and radicalis which means ‘of or having roots.’ When understood from this perspective, a radical education focuses on identifying and ‘grasping’ the roots of educational aims, issues and/or problems.

Of course, radical education is not simply getting to the roots of problems, it also involves ‘rooting out’ and transforming various aspects of society and, according to Pugh (2009) writes, this aim doesn’t necessarily result in wars and revolutions, nor does being radical always have to be associated with extreme or left-wing politics. Fielding and Moss (2010: 40) remind us that the term radical has ‘always been contentious, either because of what it is perceived to advocate or because it remains an elusive notion operating at the margins of mainstream thinking, whether left or right’.

Our approach to ‘radical education’ in this chapter refers to…

…imaginations, conceptualisations, and transformations of education as a form of transcendence, as a way of seeking to go beyond what education currently is and a dream of what it may become. We propose ‘radical pedagogy’ as a term that means to enlarge the human experience beyond the limits that have been imposed upon it – limits that over-emphasise educational aims and concepts of humans ‘being’ that focus on promoting economy over emotion, the individual over society, demagoguery over democracy, competition over cooperation, spending over the spiritual, consumption over conservation, and even human over animal, plant, and planet (Beauchamp, Adams and Smith 2022:19)

Getting to the Root of the Problem

For me, the ‘radical’ purposes of the book are twofold: First, we hope that through ‘thinking philosophically’ about pedagogy readers can be better positioned to examine the various pedagogical perspectives in the book and to critically evaluate the claims and evidence associated with these views. Equally important, we hope this approach supports teachers in developing and utilizing their own “personal practical knowledge” (Connelly & Clandinin 1985) as they determine what pedagogical practices are useful for creating the kinds of educational experiences they believe their learners and they deserve. Second, we hope the book will inspire teachers and learners to get to the ‘roots’ of the biggest challenges facing our planet and its inhabitants.

For example, the United Nations  argues that education is the key to addressing climate change, yet schools continue to face considerable challenges when including concerns about our climate crisis in their curricula. In response, educational researchers, along with social movements like Teach the Future and Fridays for Future have taken ‘radical’ steps to raise awareness about the lack of educational opportunities for teachers and students to engage in teaching and learning about the greatest existential threat to life on our planet. In some cases, such as the school climate strikes (which you can read about here, here and here), students continue to disrupt their ‘normal’ schooling experiences to participate in protests, public assemblies and other forms of non-violent activism to voice their concerns about the many problems that contribute to our current environmental crisis and the lack of opportunities they have in school to meaningfully engage in conversations about how to improve life – in all of its manifestations – on Earth.

In fact, two of my colleagues, Dr Esther Muddiman and Dr Rhian Barrance, are currently researching how educators recognise and respond to children’s rights to protest at school, and I hope they will write a brief summary of their research so far for this blog. Research like this can help us to answer questions such as ‘how do schools’ responses to student protests support or undermine curricular initiatives to address our climate crisis?’ or ‘How do schools engage with children’s rights, as outlined by the UNCRC, in the experiences they provide to their learners?’, and ‘are student-led protests at school worthwhile educational experiences?’

In the book, we argue that ‘radical’ approaches to teaching and learning can enable learners to identify the ‘roots’ of the problems and issues they care about most, and perhaps more importantly, that such an approach can help them realise how what they learn in school can be used to address these problems and concerns now, and for the future.

A Time to Reflect

Think about the power humanity wields contrasted with the fragility of its existence, the hubris of  those who think primarily of power and the influence they seek to gain against the modest hopes of those oppressed by their callous disregard. Consider the impact of human existence upon the very Earth on which we rely and the creatures and plants who share this beautiful and magnificent planet – the only home we’ve ever known. What is your pedagogical vision? What do you want for you and your students now and in the future, and what kind of pedagogy will you create and share with them in the actualisation of that dream? Consider contemplating the following questions and how your responses to them might inform your own ‘radical pedagogy.’