Words on a plane…

As I head towards China, at the end of my Australasian academic adventure (in my upgraded seat-woohoo), I thought it would be a good time to write about a couple of surfing experiences I had in this country which seems to be the talk of the international surfing community. “you think the gold coast is crowded now, wait till this really catches on in china…”

For the academic year of 2013-2014 I was based in Shenzhen, working as a English teacher in the second grade at a private school.  I had not long been back from Australia when a friend told me about this new job he had in china “nah you don’t need anything apart from your degree, it’ll be fine” he said. So I sent an email, had  a 2 minute skype call while I was waiting for my mum to come out of the dentists, and a couple of months later off I went to china. Now this is about the surf, so I won’t go into any more detail but I will say that we got a mighty shock as soon as we arrived*. Between the work, culture and food, we were caught on the back foot and stormed our way up a pretty steep learning curve. (stormed, wimpered; same thing yeah).

So I tried to find the beach. We were working loads of hours, including Saturday mornings so time was limited. But not as limited as my Chinese. I used the one English language website I could find which spoke of a beach called xichong.

We had made it out to Dameisha in a taxi on weekend 1, but I knew there was a surf beach around somewhere. So every weekend I set off on a mini adventure to try and find this beach. Well, to find the bus that would take me to this beach as per the instructions on my website. It took 6 weeks in the end.  I went to all of the bus stations in the area trying to find the 300 or 330 to dapeng. Turns out that the bus no longer existed and it was a total goose chase. Apparently this was a quiet day. this is the closest beach to the city and was free but you had to go through a turnstile because the crowds sometimes were unbelievable. us at Dameisha on the first weekend. I think we blended in quite well

Eventually, a colleague in work was able to help me using Chinese websites and gave me some solid information of where to go, what to catch. Amazing. But I didn’t believe it yet. Something would stop me. This was china after all.

I was going to try it though. I got the underground to a bus stop and was delighted to see a matching number- numbers were all I had to go on because I couldn’t understand the characters that they were labelling. So I get on this bus, which is a coach. It cost 10rmb (about £1), which is a lot for a bus there- a local journey is 2-3 rmb so I must be going far away. Into the unknown.  By myself. No map and no language skills.

The journey took me east, out of the city, through a city of shipping containers (Yantian, 2nd busiest port in china I think- enormous), and into a new place by the sea. I got off at the last stop and was in a relatively small fishing town, with a harbour and increasing numbers of little shops selling comical swimwear and inflatables. Ok, sounds about right. As I step off the bus, I’m welcomed by a group of maybe 12 men- all battling for me to choose their car. I knew I had another section of the journey to do, so I said the name of the beach and they gave me a price. I asked a few until one gave me a good price. It started at 40rmb, I think in the end I paid 15 and travelled the 5km through spectacular scenery, the road wound up into the mountains and felt a world away from the city. It was pretty scary this first time. I was in a car with some other people so I was ok with that, but these roads were windy, and our battered old mini van was travelling at quite the pace. I was so close; still not convinced, but things seemed to be going to plan. Then words were spoken, and of course I couldn’t understand or respond.  I had looked up the word for surfing, which I was clearly mispronouncing, unless they didn’t know what it was, but the driver kept on going. Xichong. Xie xie, was all I could say. Xichong, thank you.

And we got to some barriers- the road was blocked on both sides and there were toll booths. I had to pay to get on to the beach. Now this was strange; how often do we take for granted that we can just go to the beach? This wasn’t paying for parking, this was paying for access. I don’t know if it was government or private but I paid the money (I think it was 15rmb- so not expensive but would exclude a big proportion of the local population) and was driven further along the road. More words I couldn’t respond to and the car stops in a sandy car park and I can see some restaurants and a couple of shops selling more comical swimwear and inflatables. Thanking the driver (cos that’s the only word I know), I get out of the car and head towards the sea. Still not convinced but getting more confident. Through a gap in the commercial activity I see the beach. And the sea. And the waves. I go down the steps onto the sand and I remember clearly actually falling to my knees to look at it.

I had made it.

The sea was there. It was blue, there were mountains all around, there were waves, and even a few people surfing them. The sense of accomplishment I felt was probably totally irrational, but it was such a good sight and I was very pleased with myself.

It was boiling hot as always, so I paddled along the shoreline and hoped to find a place I had read about that rented surfboards. I FOUND IT. They rented boards, sold pizza, burgers and beer. And it was right there on the beach, overlooking the sand, the water, the waves.

The owner was American and the staff, proper surfer looking with deep tans and matted long hair (male and females), were used to speaking English so I was able to straight away get a board and paddle out into the tropical water.

I write these little tales to try and get a sense of place in different surfing places. What was strange about this experience was that it gave me a sense of place, but I was no longer in china. It felt like Indonesia. The beachfront café, surf and scenery didn’t feel like I was 2 hours away from a city of 14 million, it felt like I was at the beach, on an island in the sun. a world away from my tough teaching job and alien lifestyle.

I must have looked like a total crazy person that afternoon. Saying to anyone who would listen “we could be anywhere” “doesn’t feel like china” “woahh, this is amazing”. all with a massive smile across my face. The surfing itself I actually cant remember so much. I know it was pretty small but had a decent shape to it and I had rented a big enough board that I was able to catch plenty; this was not long after Noosa and Indo so I was OK at the time and was confident so rode them pretty well. I might not have been of course, but it felt bloody brilliant. The water didn’t seem too polluted and looking back at the beach I really felt like I was on holiday. 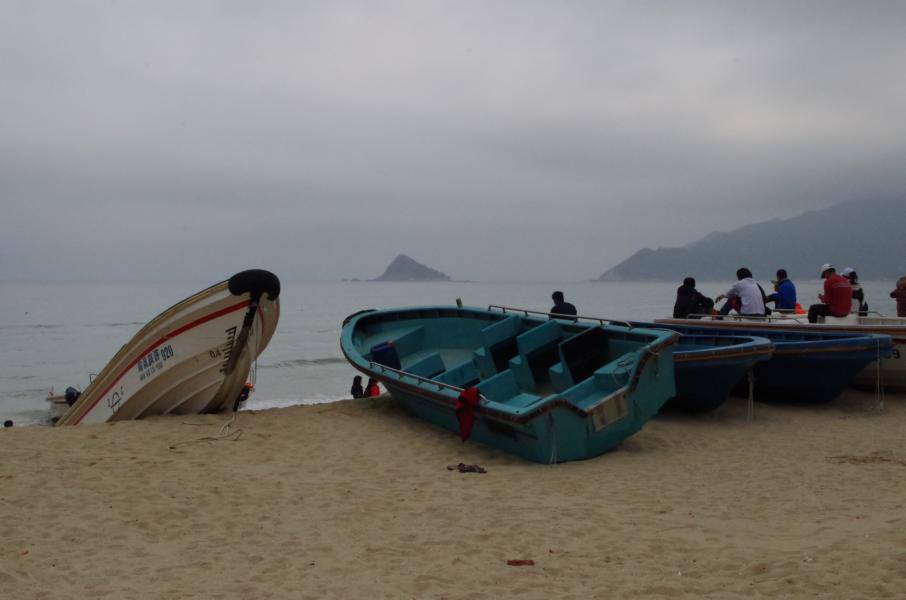 Just going to park the boat… 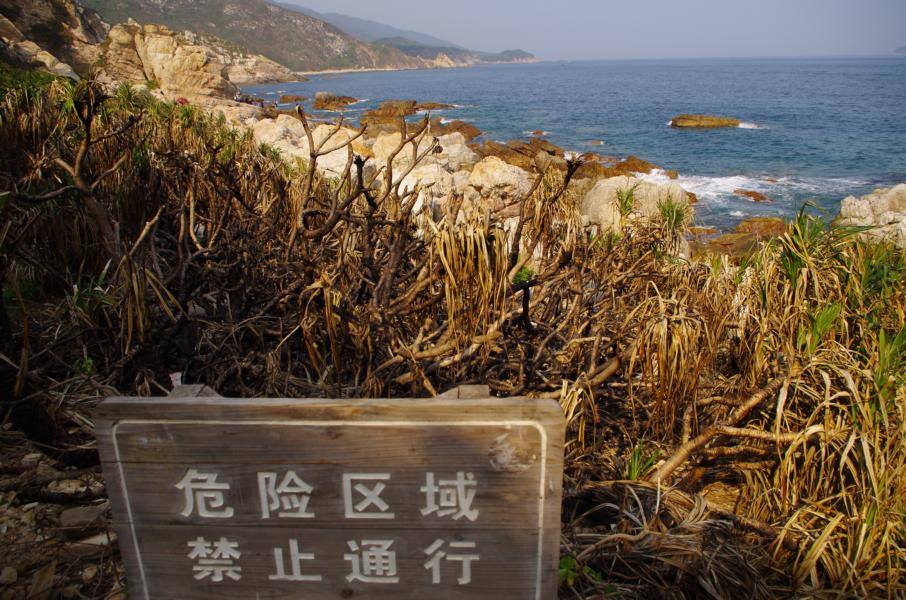 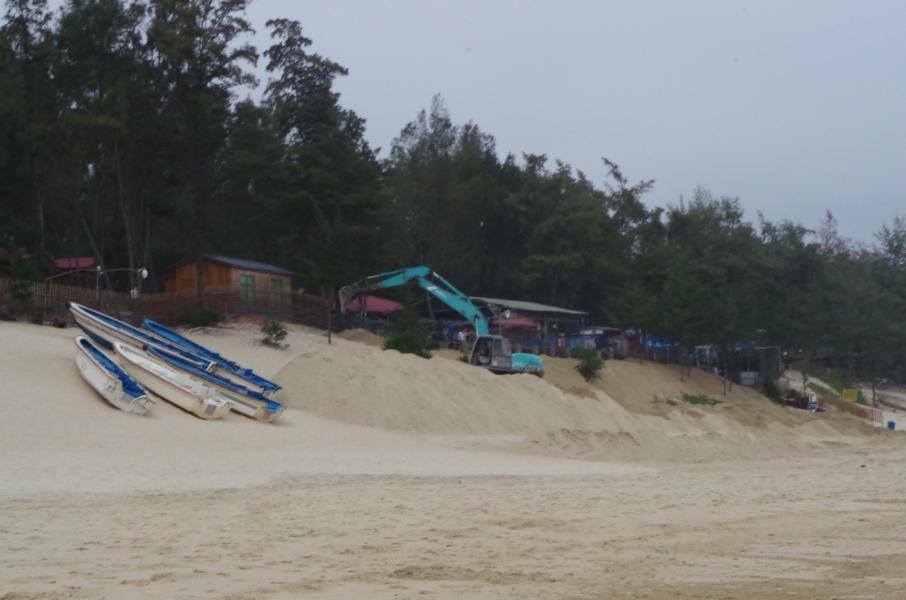 The beach was divided into sections, like swimming lanes with those floats on ropes to split up the areas where swimming (and surfing) was allowed, and those where speed boats would come flying off the water, and straight up onto the sand. This caused a bit of chop and was quite terrifying but once I realised the system it was ok. There were a few surfers in the water and the standard was low- probably how I managed to get so many waves, but it was a scene and there was a mix of Chinese and foreign participants. I was delighted to be a part of it.

Taking the board back I sat and had a pizza and a beer, watching the beach and thinking that I had saved my time in china. I was going to come back every weekend and surf all the time. But first I had to work out how to get back to the city……yikes.

To summarise: I worked it out. I told the others how I did it and we went out there a few times before winter hit and we got busier with school, sometimes staying overnight in a hotel owned by the surf café, and later in cool beachfront cabins. We went surfing another few times but conditions were never like that first perfect day, or at least never like I remember that first day to be. Once I got caught in a rip and had to use the lane dividers to pull myself back to shore, that scared me a bit as I wasn’t expecting such strong currents but there were plenty of speedboats around to rescue me if necessary I suppose. We’d hear them coming and double check we were in the right lane as they buzzed passed to beach themselves and pick up the next load of umbrella wielding thrill seekers.  I went on one once. The lack of health and safety rules in china meant that stuff like that was always super fun…

I really loved going out to that beach. By the time I came home it didn’t seem like indo anymore. It was Xichong and it really helped me through some challenging times. 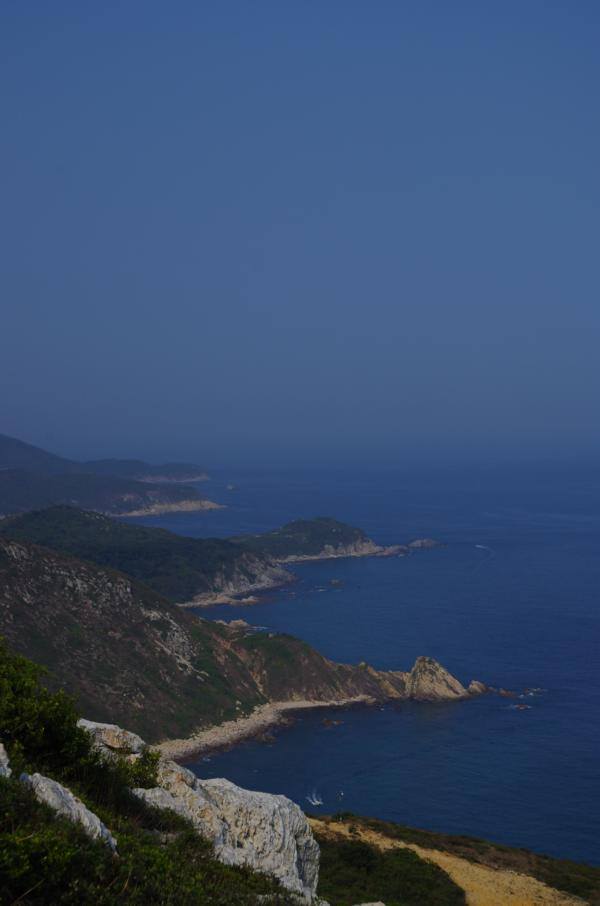 The top of the steps 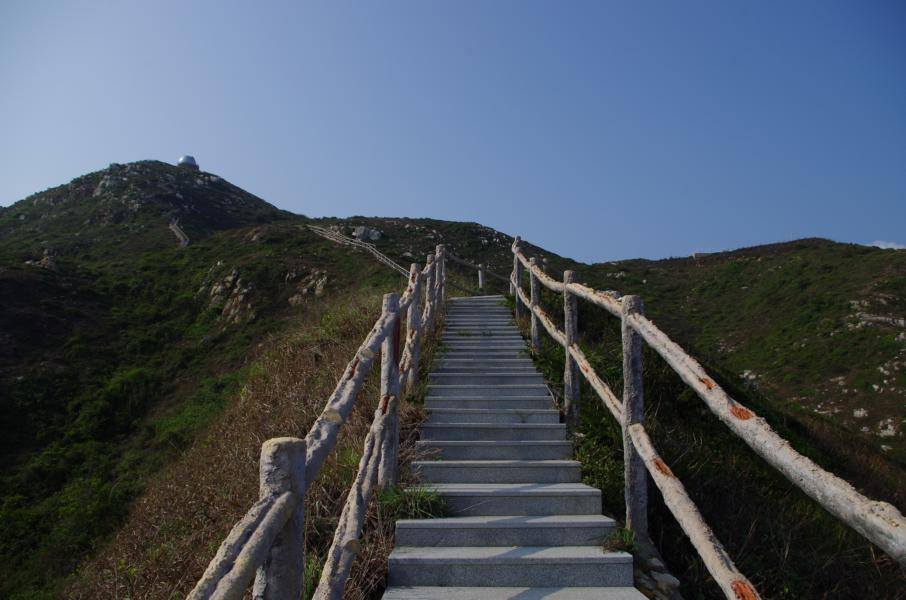 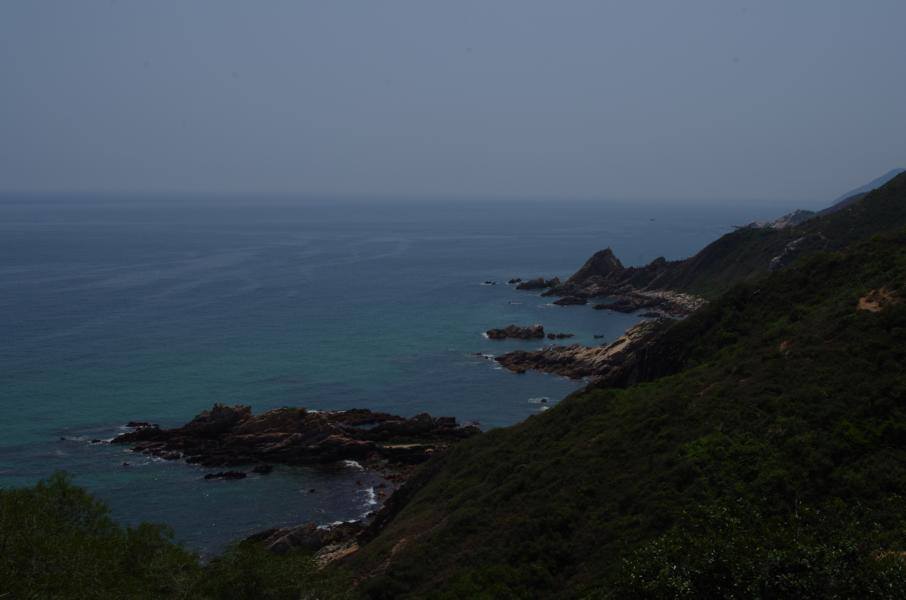 this walk from Dongchong to Xichong remind me of Aberystywyth to Borth, or Bondi to Coogee. 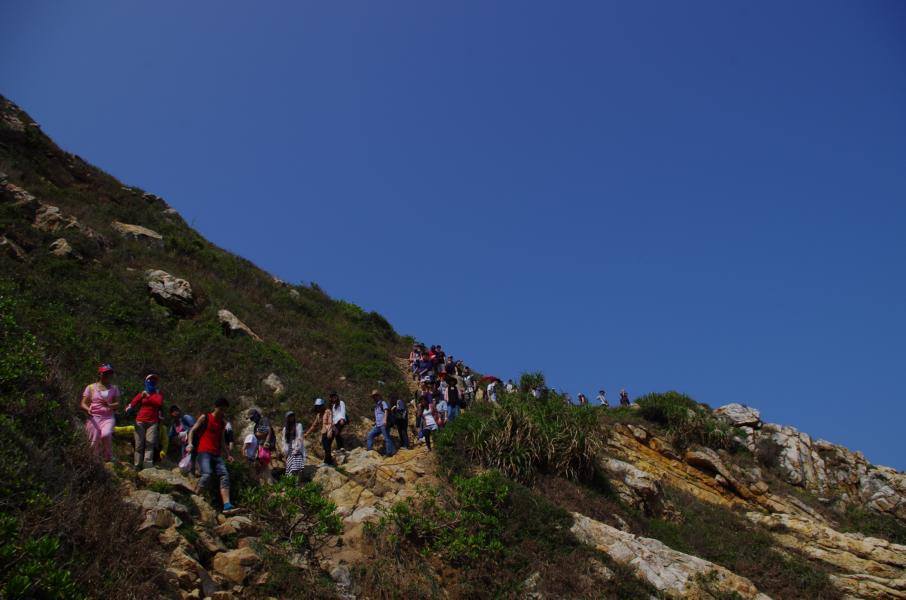 ..but then you are reminded that you’re in China… 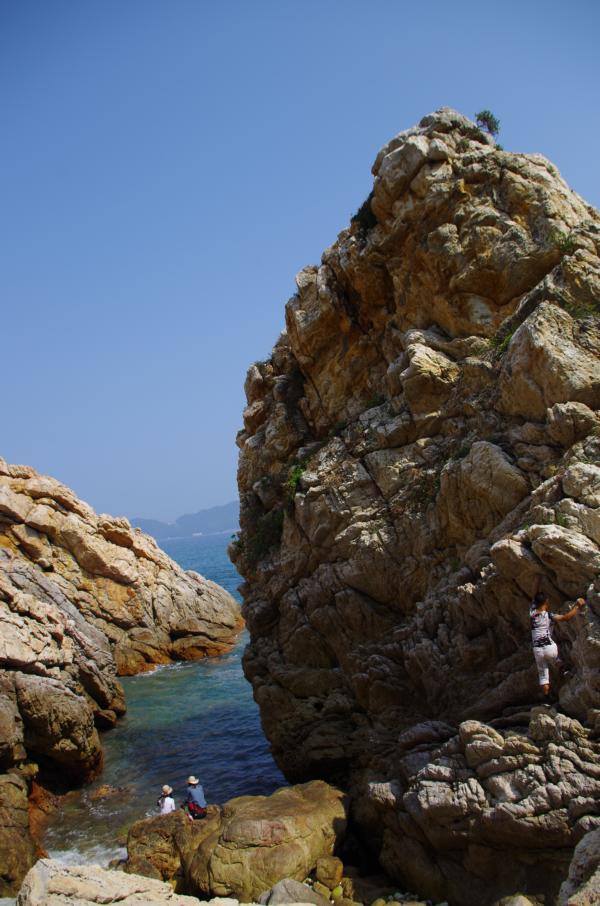 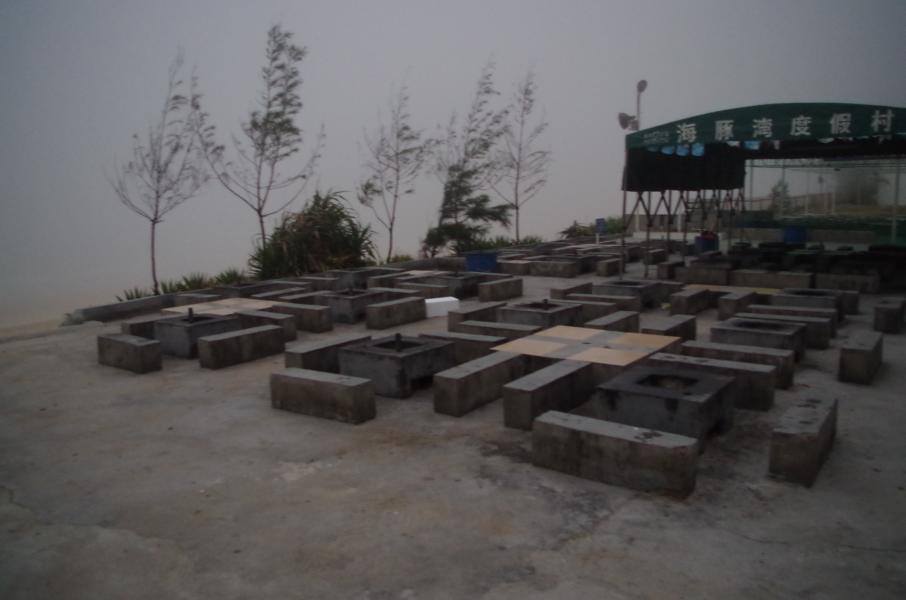 A foggy day. these were barbeque pits that you could rent/buy packs of mystery meat for. The fire was started with a big blowtorch. 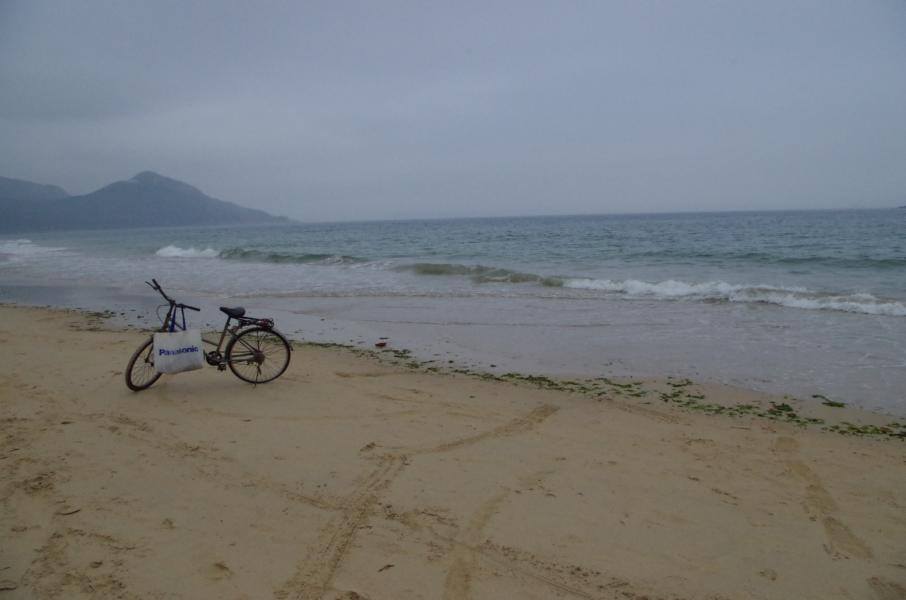 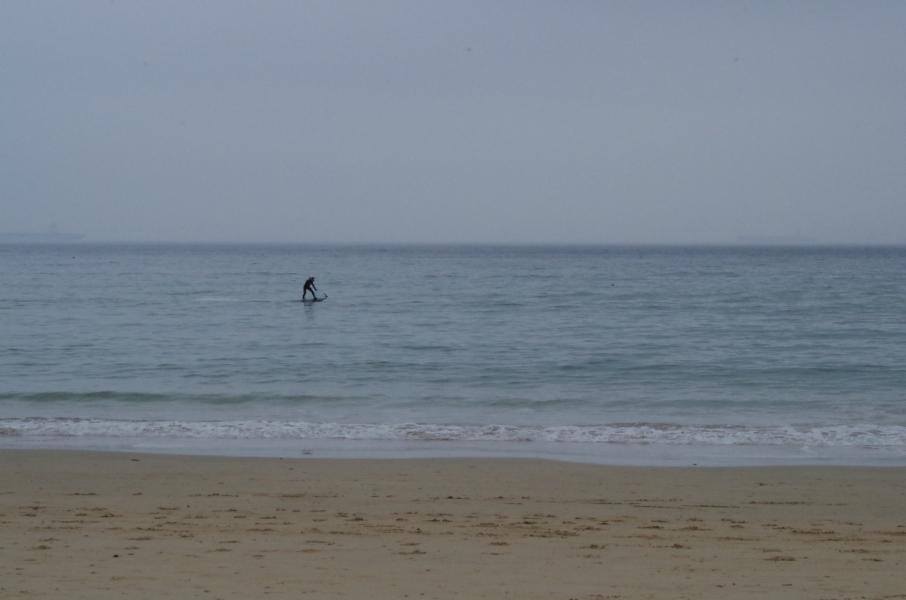 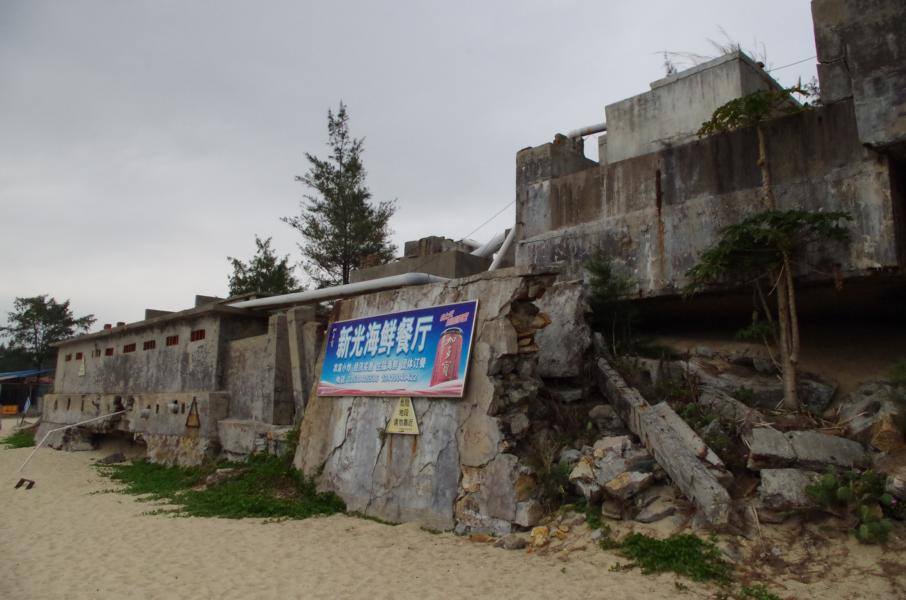 I reckon this would have been redeveloped into a big hotel by now. 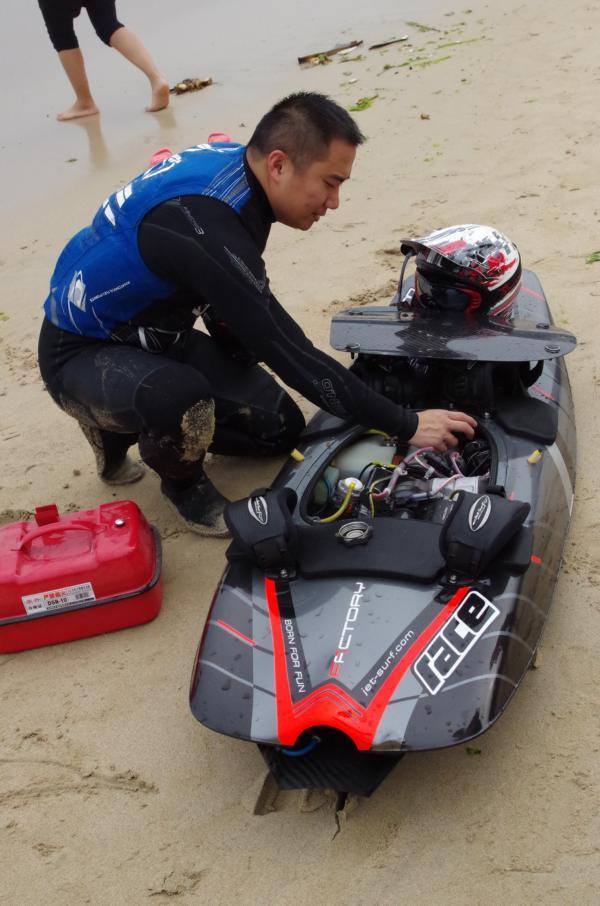 Who needs waves? This guy was flying around the bay. 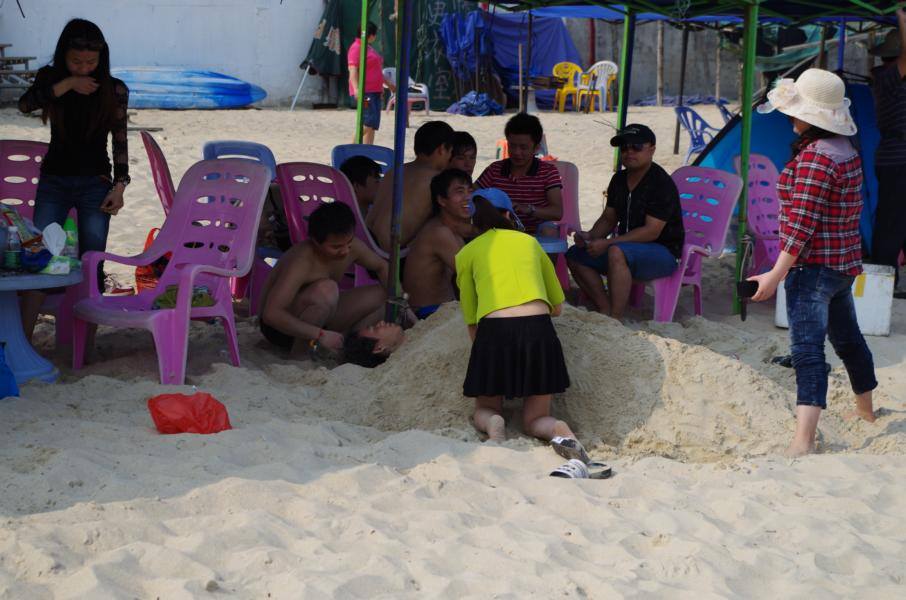 Too hot? just have your friends bury you in the sand. This was very popular. 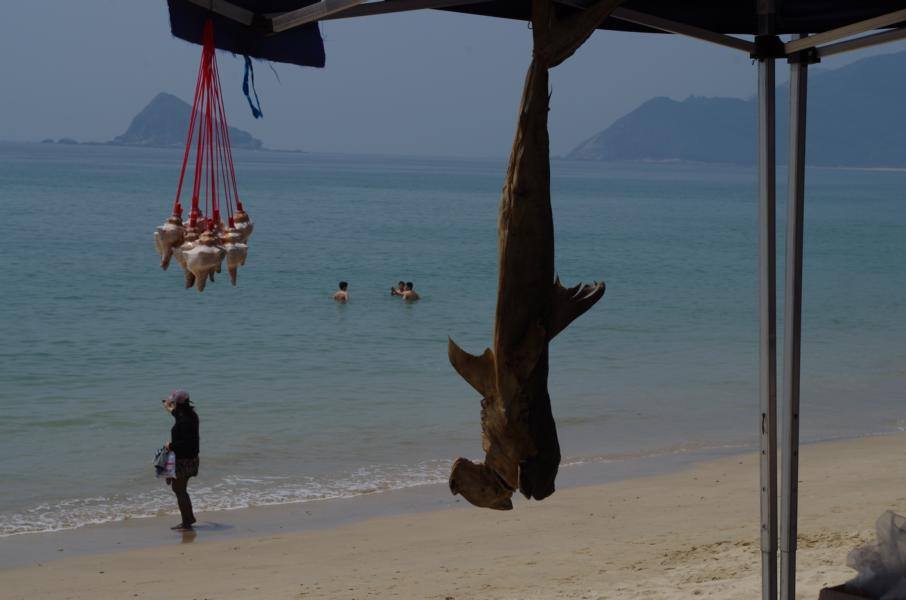 Not quite the beach stalls we’re used to. Hammerhead, anyone? 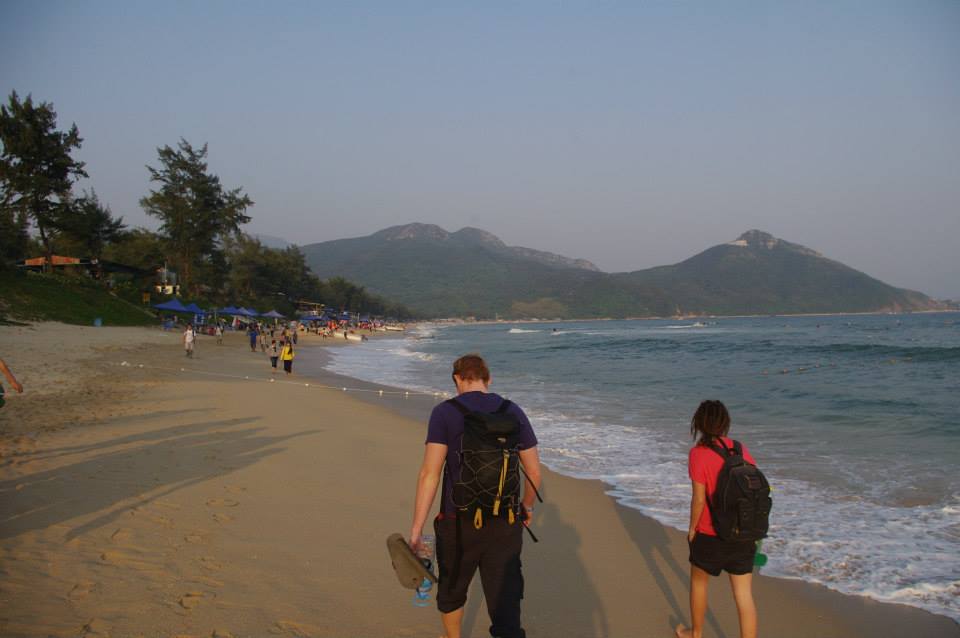 walking along the beach 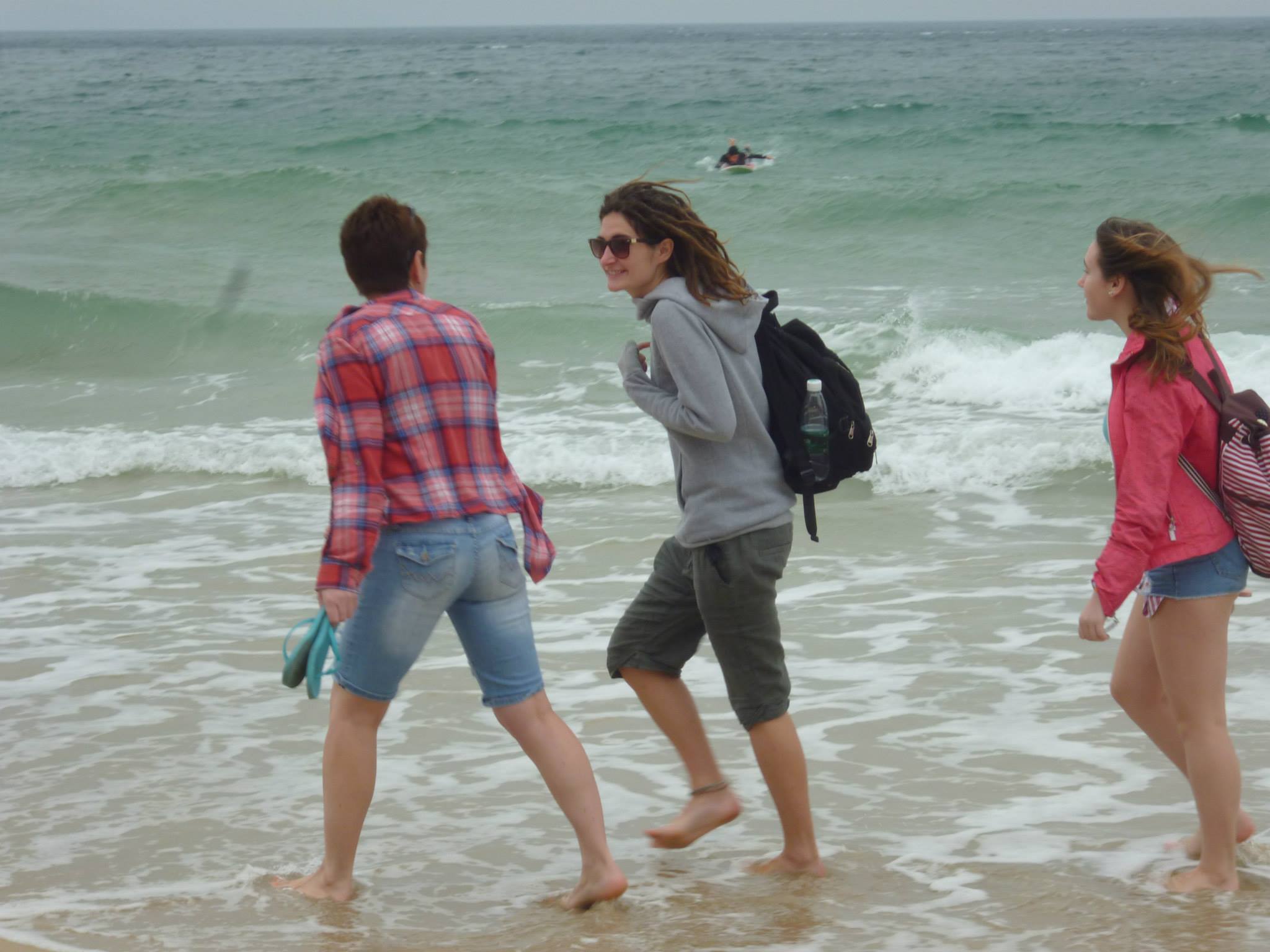 Me and some friends walking along the shore. The only picture I have of someone trying to surf.