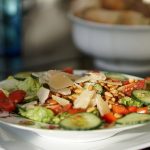 Let’s head out into Cardiff for some grub. Its always an attractive option when we fancy a break from cooking or for those who don’t like to dabble in tesco’s stiry fry mix and green paste,  its a treat in amongst those dodgy packet pasta meals.

I spent a little time with some friends heading to a few places in Cardiff where you can grab a great lunch when you want to try something a little different. Unfortunately I couldn’t get to every quaint little diner on my radar. I’m at the end of my final year and its that time when we stop spending like Jordan Belfont and start behaving like scrooge.

Anyhow, here’s a list of the places in the video.

Cardiff Market; there’s all sorts, Thai food, fresh fruit, two bakery’s and your classic greasy spoon on the second floor (very reasonable prices). Also if you want to buy a fish for your flatmate as a secret santa gift, its ideal.

The Hayes; I only had the fish and chips but if you’re in town before a sporting fixture and you don’t mind the five pound price and you need something on the go, it’s a great deal. (Includes mushy peas and free drink / fish was very fresh too).

Deli Rouge; Gorgeous little deli at the end of Mackintosh place. Serves meals and drinks by day (including a great range of cheese, oh la la, very continental)  and on Wednesday evening its home to the successful ‘Unplugged at the deli’ acoustic evening. This holds the key to some reasonably priced wine and nice IPA Beer, so if you wanted an evening with a little less pace to it than the su, I’d highly recommend. The food itself is fairly pricey however so perhaps call it a date spot?

Most people know of ‘The Early Bird’ but if you’re unfamiliar then this should be on your radar. Whilst again, the price is a little higher than your average cafe, the two pound unlimited filter coffee is bang on and those avocado eggs are very popular. It’s often quite busy of a weekend and around this time of year but get there early and you’ll find a great spot. A special mention for James who works there; a very friendly face who adds that little bit extra to the experience. He also plays a killer set at the aforementioned Unplugged evening! Bonus rating for the music played in this place, its very guardians of the galaxy funkytown.

The New York Deli is one of the gems of the arcades. This is the perfect venue for a bite to eat with your house if you’re out and about in town. It’s a more expensive bite to eat coming in at around 6.50 for your average ‘hoagie’ or ‘grinder’ but it’ll fill you for the rest of the day so if you think about it, that’s dinner sorter too! Again, its sometimes a little tight inside but most people grab something to take away so you may well find a seat. On a side note, the staff are very accommodating. I have an annoying intolerance to fructose and of the three occasions that I’ve been, who ever was behind the register was more than willing to check the sauces of the various ingredients. Would definitely recommend the meatball grinder!

Here’s my curve ball. The Table is a recent addition to the cafe scene in the Crwys area. Previously a small church, the owners now open up the building as a drop in  cafe on selected days. I can quite honestly say that Rob, who you will recognize for his warm approach, is the most hospitable of all. You will always find a table, its easy access to both wifi and plug sockets which also makes it a grand spot for revision. Furthermore, Rob is always pleased to see a returning face and might just send one of their famous Norwegian hot chocolate’s your way or a fairly slammin sandwich. I think the greatest factor is that Rob bills it as a place where students can get a little rest bite. As an ex sixth form headmaster, he’s a great guy to chat to about what’s occurring in the student sphere! Again, its a must from me.

& ‘Caffe Citta’…  Quite honestly the best Pizza I’ve had in Cardiff and one of the best that I’ve ever had period. I went to this little Italian with my girlfriend for out second year anniversary and it was perfect; great food, nice staff, very cosy and because its incredibly popular, it felt as if we were doing well to be inside (we booked a week and half in advance and it was just as well). This is situated on Church street, just around the corner from the indoor market and its worth considering. Its a fairly pricey wine list if you’re that way inclined and the pizza is not the cheapest but its less expensive than dominoes and its real pizza; very minimalist, noticeably brilliant.

Notable recommendations (sadly I don’t have the budget to go nuts and film them all):

Hellenic Eatery. Situated on Crwys road, this alternative Greek eating spot has some of the best value for money dishes in the area. The atmosphere is fantastic and the owners always welcoming. Perhaps not a first date spot but great to go to with friends.

Arty’s Kitchen. Previously The Pot (Not moved onto Whitchuch road), this is a great spot for a reasonably priced lunch. The avocado chicken with additional soup extra is highly enjoyable. So too, the new offer for free tea or coffee with breakfast isn’t bad when you remember that good  coffee can cost half your tuition fee.

Chai Street. There are two Chai Steet’s in Cardiff. One of which is on Cowbridge road in Canton (near the principality) and there is one on the high street! It really is great stuff. Its authentic Indian street food and they don’t hold back on the flavor or the spices. I went for the Chai Special Thali which includes a little of everything (one lamb, one chicken and one vegi dish) and it did not disappoint. To buy a pint is a little pricey and I must say that the meal itself is not going to leave you stuffed in the way that the hellenic eatery/ new york deli will. However, the ambiance and the quality of the food makes it worth a visit!

Not convinced by anything I’ve got to say? Check the sites out for yourself!