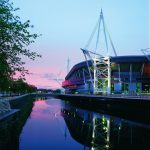 Back at it again with my second March post.

This one is a little less Student centered and a little more in the way of documenting the attraction of having a big ol’stadium slap bang in the center of the city!

Unless you’ve been living under a rock or one of the many mattresses outside of student houses in Cathays, you’ll be aware that the Six Nations have come an gone and as per, The Principality Stadium played host to a couple of key games.

I won’t mention too much in the way of the scores (I’m English) but I will leave you with this; a short piece designed to showcase the atmosphere on match day. The one I’ve gone for is Wales v Ireland as we all know the Irish bring the party. The video can’t really do justice to just how alive the city felt prior to kick off  but it can go some way to testify that not all sports fans are loud mouthed bigots. Quite the contrary really, there were multiple groups of fans from both nations enjoying the various music acts playing in the surrounding streets. That’s another note, there are some great live bands on the day of fixtures, especially one brass band spotted in this video.

In short, the stadium appeared to be rocking too. I have some footgae of the actual game courtesy of a friend who was fortunate enough to be there. The great thing too is that the stadium perpetually promotes an equally upbeat atmosphere at other big events. Note that the Champions League final will be played at this very stadium on June 3rd!

To close, I mention all of this because a stadium provides more than just sporting/music events… it is a chance to feel part of a bigger community, to expand your social circles if you’re out with friends – donning the Welsh (English) shirt – and of course to show off the vibrancy of the Welsh Capital. There are more affordable events for students too. Check out this link for the annual ‘Judgment Day’ event that occurs every April, bringing two games for the price of one! https://www.eticketing.co.uk/principalitystadium/