It has been a massive honour to be a part of Python Namibia 2015 and the Phoenix project, which works in tandem with the Welsh Government’s Wales for Africa programme. The Phoenix project itself is one five flagship engagement projects run by Cardiff University working hand in hand with UNAM, and it feels wonderful to be involved in something so worthwhile. Throughout the week we have learned a lot and developed many skills including teaching and presenting.

The first day was equally overwhelming and exciting. It was challenging, we had to set up all the laptops while dodging enormous and vicious looking bugs! We had to think on our feet, adapting to any problems that arose. We each gave a talk, Jason on simulating a queue in Python and Geraint on coding the Q-learning algorithm. We thoroughly enjoyed delivering these talks to such an engaged audience, and Geraint learned a lot as this was his first experience of presenting.

A particularly fun part of the conference was the lightning talks. We enjoyed briefly speaking about our journeys to becoming coders, overcoming the fear of making mistakes and the birthday paradox. One talk that got all our hearts pumping was Geraint’s demonstration of the Monty Hall problem as he raced against the clock to live code the example.

We spent the last day of the conference delivering a workshop on how to simulate a queue in Python. The whole session was an amazing success due to the enthusiasm of the Namibian students. One student, Samo, went slightly further and offered to deliver a talk on what he had learned during the day. This included running a simulation model he had built, and a few scenarios where queue simulation could be applied with a view of writing a final year project on one of these applications. This has potential for distance supervision by Dr Vincent Knight. Samo spoke incredibly well about a subject that he had only learned at the conference. This was an incredibly proud moment for us as queueing theorists.

Everyday of the conference brought us a lot of personal joy, seeing the gratitude and interest of the students. Mealtimes with the attendees were a great pleasure, making friends and having the most interesting conversations with the Namibian students, and learning a new ‘handshake’ everyday. Hearing their reasons for having/wanting to build their own applications was a delight, from greater connectivity between rural villages, to wanting a place to advertise unwanted items on the web. Staying in touch with some students like Kandoza and Shetu is making us smile; they taught us more about Namibans and Namibia than any tour guide could.

Of course, we all made some wonderful friends out there, we will miss having photographs with Paulus every hour of the day, and we will remain in contact.

We feel this has been an incredibly successful trip. The fourth day saw the foundation of PyNam, a Namibian Python community, which will hopefully be the key to organising more events like this for Namibians by Namibians. One particular student, a young mathematician called Jessica really embodied the impact of our stay. She started the week without a computer (and made use of one of the laptops that were kindly donated) and never having seen Python before. She was enthused by the talks and workshops, and by asking interesting questions throughout she had developed into a great programmer. She ended the conference presenting her skills in front of everyone on the last day, and is now chair of PyNam.

Throughout the organisation and running of this conference, we worked with some great people (including Tom, Alan, Loek, Jason, Shay, Kauna, Vince, Daniele and Peter who filmed it all). We are all extremely grateful for the support shown by both universities as well as as the Phoenix project. Finally we are extremely grateful to the Namibian people and their hospitality. 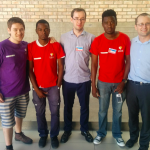 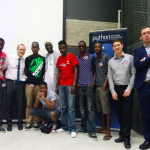 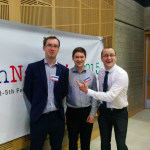 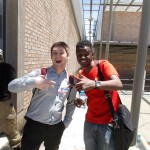 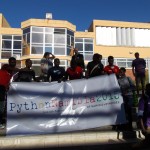