This post relates to a previous post inspired by Mr Mock at Risca Comprehensive School and his passion for the Welsh Dimension and International Perspective of the new curriculum for Wales.

Successful Futures was published roughly around the time I was conducting research on the effectiveness of the Curriculum Cymreig and how pupils’ perceptions of place do not necessarily resemble curricular representations of Wales. So when Welsh government asked me to speak with Pioneer School teachers about the Welsh Dimension and International Perspective (WDIP), I was more than happy to be involved.

Our first meeting focused on the challenges of promoting Welshness in schools in Wales. In our second meeting, we moved beyond considerations of Welshness and discussed the theoretical rationale for the WDIP as set out in Successful Futures. Much of the language in Successful Futures regarding “global citizenship” is borrowed from conceptualisations of citizenship defined by the OECD and framed within a broader discourse of globalisation. In fact, the WDIP could be loosely interpreted as a repackaging of the OECD’s Global Competency with a sprinkling of Welsh-flavour for context.

The broader discourses of globalisation I refer to above include, but aren’t limited to, the following:

I, like others, argue the OECD’s conceptualisation of a global citizen is organised largely by neoliberal discourses focusing on citizens as consumers in a global market rather than members of a human, global community. This places an emphasis on economic trade as the most desirable characteristic of citizenship. Even when combined with key terms like sustainability, the question remains, is the framing of global citizenship with sustainability concerned with the conservation of Earth and its resources for a better quality of life, or is it primarily focused on the sustained ability to exploit its natural resources for economic gain? 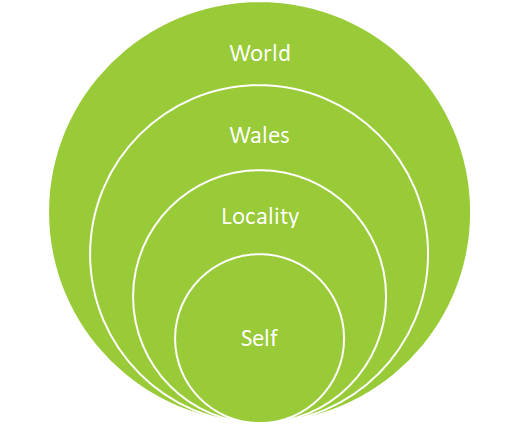 As an alternative to “Global Citizens,” I asked the teachers in our meeting “what if we replaced ‘Global Citizen’ with Cosmopolitan?,” referring to both contemporary and historical cosmopolitanism as a way for teachers and pupils to consider how they can ethically regard, engage and respond to ‘the other,’ in what Appiah describes as a ‘world of strangers.’ I created a simple diagram of concentric circles, along with the following principles, to help us answer this question:

We then continued with a simple comparison of globalisation and cosmopolitanism:

Whereas Globalisation is preoccupied with…

The current draft of the curriculum for Wales includes a much more comprehensive and detailed discussion of global citizenship than previous attempts (e.g. PSE and EDSGC ‘curricula,’ and Curriculum Cymreig – these are really more like initiatives than discrete and coherent curricula). However, they are still largely circumscribed by ‘development’ of education discourses that privilege, technical efficiency, modernisation, human capital and economic development over other concerns.

As Dr Dan Evans (@Dai_electic), Dr Sarah Morse (@petit_morsel) and others have argued, there is still much work to do regarding treatments of citizenship education in the curriculum for Wales, including how teachers and pupils are to specifically engage in what I believe is one of the most important, and overlooked, aspects of school curricula. As curricular work continues in Wales, I hope we further extend conversations of citizenship beyond limited conceptualisations of citizens as consumers or market-actors. Rather let us first consider a citizenship as membership in the human family, recognising we are unique individuals of diverse character and personality, existing in a common, global community.