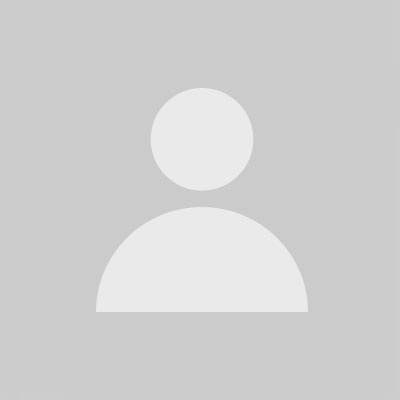 As with last year, I was lucky enough to be a judge at the NHS Hack Day held at Cardiff University. For much more background on the event and location, have a read of last year’s blog post – once again Anne-Marie organised things. 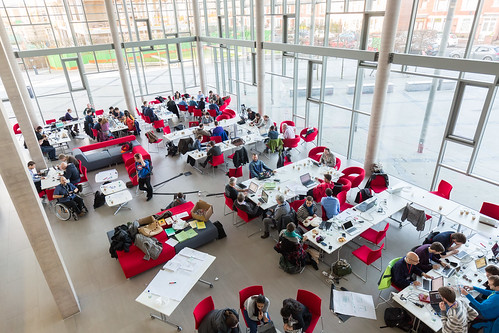 All photos here are from Paul Clarke – use him for your events!

I was particularly keen to make it this year, having been a cancer patient over the last nine months, and seeing first hand how dedicated the NHS staff are through difficult times. This did mean I could only make the presentations unfortunately, so this is a shorter post, but even with that I could still feel the huge effort made by all teams over the weekend.

So on with the notes from the presentations…

First up we had the catchy General-Purpose Medium Timescale Messaging system with High Reliability, or GPMTMSWHR as the cool kids call it. This was essentially a web page to SMS gateway (using a third party, Criticall). It could also generate other outputs – email, voice etc. It had a particularly nice feature of cascading alerts to other people if there was no response – the high reliability part.

Along similar lines was GWYB (not sure what it was about project names this year, but at last this sounds Welsh). This was also a notification system, but more patient focussed. Events would be fired in association with, say, attending a health or care facility. Then the patient or a carer could be notified. A particularly nice feature was the If-This-Then-That simple style creation of rules. 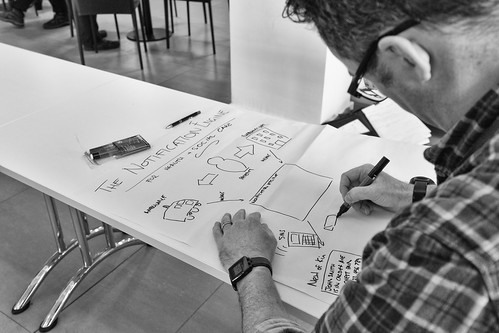 Both of these projects seemed to highlight a lack of event driven notification, both for the medical staff and patients. To scale these possibly need to be using some sort of Mule/WSO2 type of middleware, and would have tricky integration points with existing systems – but even a small standalone system may have benefits. It certainly highlights a gap and a probable need.

ANGEL Murmuration (OK, we’re getting somewhere with project names now…) was a beautifully design app with backend to quickly and intuitively score five factors on a radar/spider chart. ANGEL being the factors – Activities, Needs, Goals, Escalation, Location. This was particularly well received by the judges as it took a fairly general brief and really honed in on a specific usable solution. 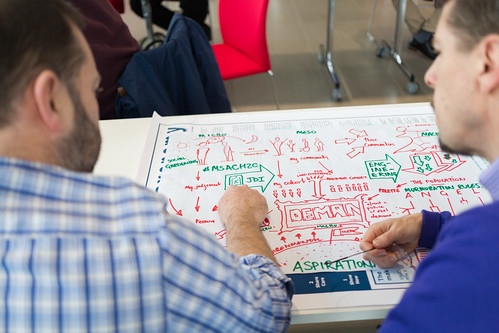 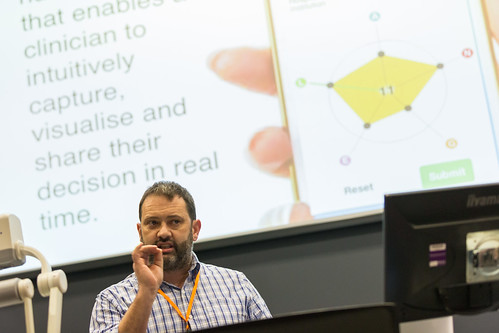 Virtual Microscope took a different approach in rather than solving a need from a medical person attending, they resurrected an abandoned open source project – NYU’s Virtual Microscope. This was really heartening – taking something useful but under used, then polishing it up, packaging, testing and documenting. This will be followed up at the next DjangoCon. 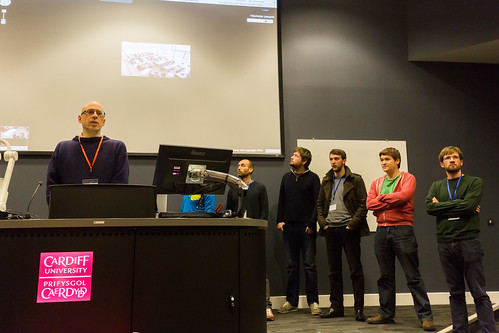 Zombie Drag Racing has the coolest prop by some distance – an Oculus Rift! This was a vision based project to help asses the safety of patients to drive. As you drive zombies appear in your peripheral vision inside the VR headset. It would be a cheaper and more portable version of existing specialist tests for peripheral sight. It’s always a nice change at these things not seeing a mobile or web based application. While driving would be one use, the judges felt there was a lot of potential in this approach for younger patients needing similar vision tests. And it wins points because, well, zombies. 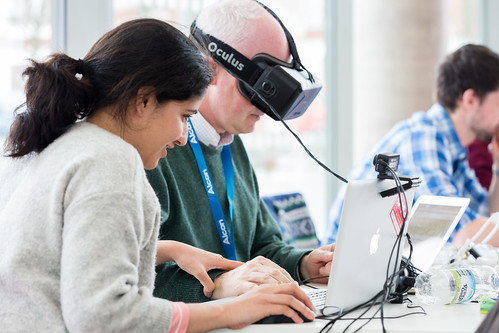 There were some visualisation projects too. One of these was Visual Press, a way to visualise medical data and compare with real life objects – such as an ant, or the Eiffel Tower. This was interesting, and could be used in a much wider context that just medical data.

Another was from the MSc in Computational Journalism team, here in Cardiff, producing Health Explorer Wales. They took datasets and produced clear and lovely looking visualisations of currently hard to interpret data, in a similar approach to the Guardian’s datablog. I particular like this entry, but I’ve got a soft spot for data and visualisations though. We will launch a data.cardiff.ac.uk one day… 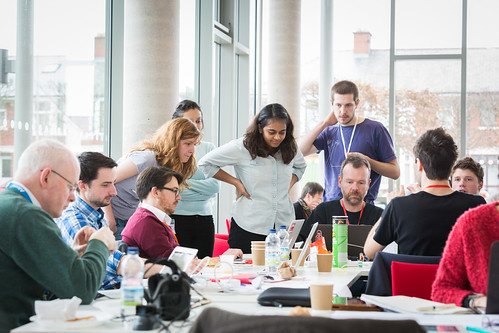 The Wales Coastal Path Large Group Participation project took a nice different approach – rather than addressing direct medical issues, looked at helping prevention of issues in the first place, which was good to see. It did this by adding some gameification elements to groups of people walking the coastal path in Wales. This was another good looking project, with a visual representation of the coast and a full backend admin system. 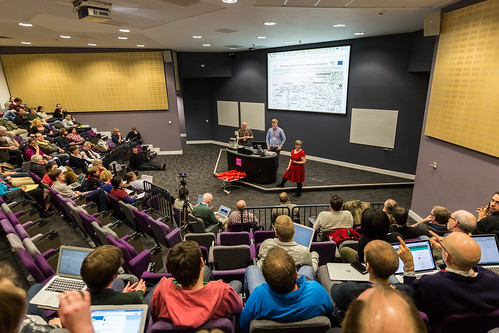 Medict was a neat project that was fully finished and published by presentation time, complete with website – http://medict.io. This is a lovely little chrome plugin that will link any medical terms on any webpage to an easy to read definition from the NHS Choices website. This could be handy for both professionals, people tangentially related to the profession, or patients. This was from a startup bioscience company team – always really nice when a company contributes back to open source. 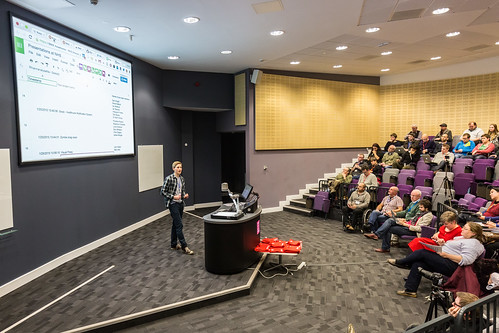 Medboard was a very practical solution to a specific problem – how do students get to sign up to informal practical / theatre sessions with doctors and surgeons? This falls into the category of being-surprised-it-doesn’t-exist, which seems a bigger pool than you might think in the medical world. The solution was a essentially a booking and tracking system, that pretty much nailed the requirements. The only caveat might have with that is similar open source generic booking systems exist – and to get most effective use integration is probably needed with student or theatre list systems. But it’s a good example of the value of a hackday style event – a prototype was produced that makes the need clear, and a potential solution, which even if not immediately for use is far more effective than writing a long paper proposal that gets filed away.

For the record, although judging is a bit nominal with things like this, the panel spent half an hour discussing the entries after the presentations. After a vote, Medboard came first, followed by Angel Murmuration, then Zombie Drag Racing. Special prizes for patient engagement went to Angel Murmuration and GWYB. 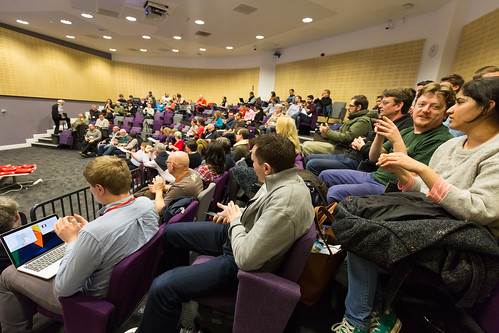 As this is a technical blog, and having attended lots of hack days and bar camps over the years, there were some interesting technical themes cropping up: 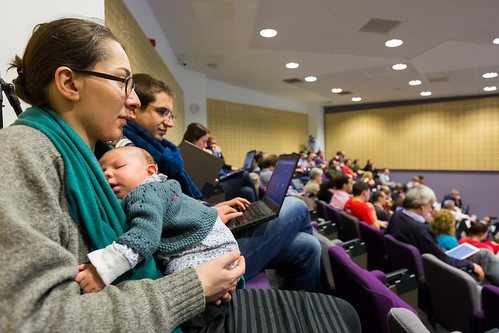 Overall it was another great success – well attended, with some great ideas and good prototypes produced. The next one will be in London, and will be returning to Cardiff next year! Get those ideas and teams ready…