It probably didn’t escape your notice that yesterday was 29th February – a date that comes round but once every 4 years. The reason for having leap years is explained in detail by Phil Plait on his Bad Astronomy blog (which is actually quite good). It’s essentially because the Earth’s rotation and the Earth’s orbit around the Sun aren’t quite in sync. Although a year is usually 365 days long, the Earth actually takes around 365.25 to get to the same place in space around its orbit. (It’s not exactly 365.25, and Phil Plait explains the details so I’ll defer to him.)

That means that after four years a daily calendar has moved ahead of the yearly changes of the seasons by a day. Not so much of a problem, you might think, but the effect builds up, and after 40 years the calendar would be 10 days ahead, and after a century around 25 days ahead. That means that midsummer’s day would not be in mid-late June, but mid-July. The equinoxes would also move, and that would mess around with Easter (the date of which is defined by the equinoxes and the phases of the Moon). To compensate for this we insert additional days to keep in sync. This is nothing new – thousands of years ago when calendars were based on the moon, the months were shortened and lengthened to compensate. As calendars have changed over the years the way the date is added has changed, and it;s been settled on 29th February for the last few hundred years.

So what else could we do about it?

Over coffee earlier today, a few of us discussed whether it would be possible to either slow down the Earth’s spin or speed up its orbit around the Sun, such that there were exactly 365 days in a year. Sounds simple enough, right? After all it’s not a big change – it only requires increasing the length of a day by one minute – a speed increase of 0.068% (less than one part in a thousand).

The energy of a rotating body is a combination of its “moment of inertia”, and how fast it is spinning. The moment of inertia is a measure of how easy or hard an object is to spin, just as an object’s inertia (or mass) is a measure of how hard it is to move. depends on the objects mass and its size, or at least the dimensions of its spin or orbit. The more massive an object is, the harder it is to spin and so the higher its moment of inertia – that’s very similar to normal inertia, which is how hard something is to move in a straight line. But an object with the same mass is harder to spin if it’s spinning in a bigger circle – either because the object itself is bigger or because it’s orbit is bigger. Imagine swinging a ball around your head on a piece of string (massless, frictionless string, of course). If you increase the length of the string it’s harder to make it spin around your head – its moment of inertia is larger.

That’s quote a lot of energy. To give a comparison, that’s more than twice the total estimated energy reserves in all the fossil fuel on Earth. So we’re not going to be doing that any time soon with conventional rockets.

But what about other energy sources?

If we had some sort of matter-antimatter power generator, it’s the equivalent of converting about a thousand tonnes of material into pure energy – so all we’d need to do is find 500 tonnes of antimatter… Again, to put that into perspective the total amount of antimatter produced to date (in places like Fermilab and CERN) add up to less than 20 nanograms – by my calculations enough to boil a few litres of water.

If you’re feeling like using renewable energy, you could try to harness the power of the Sun. All you’d have to do is collect all the sunlight falling on the surface of the Earth for about a week, and they you’d have enough power – though you’d need quite large batteries.

So what about speeding up the Earth’s orbit? 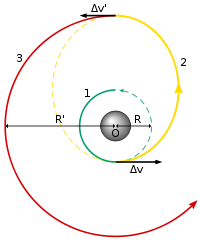 A Hohmann transfer orbit, in this case form moving from a smaller (green) to a larger (red) orbit. Image credit: Leafnode (Wikimedia Commons)

The other way of doing this would be to shorten the period of the Earth’s orbit by that same relative amount of 0.068% – reducing the length of a year by 0.25 days. It turns out the energies involved here are much, much larger – although the rotation speed is much smaller (a year is longer than a day), the size of the orbit is much, much larger than the Earth’s radius, so the moment of inertia of the Earth’s orbit is vastly greater.

To get into an orbit with a smaller radius you have to slow down, such that you fall into an elliptical orbit with the closest point to the Sun (your perihelion) being your target radius. The nature of orbits is that you’ll stay in the elliptical orbit, coming back out to the original, larger, radius (your aphelion). When you’re at perihelion, you then slow down again to circularise your orbit.

Unless my orbital mechanics has failed me, in this case each manoeuvre requires changing the Earth’s speed by about 58 m/s. The energy required to change the Earth’s speed would be about 1031 Joules – or the equivalent of converting 100 billion tonnes of matter into energy. That’s about the mass of an asteroid 7 km (4 miles) wide. And you’d have to do it twice.

But what about harnessing the Sun again?

And if you were harnessing the Sun’s energy you’d have to collect all the energy falling on the surface of the Earth for nearly 2 million years before you’d stored up enough energy for each manoeuvre. Of course, if you’re going to do that you could just build a Dyson sphere around the Sun and collect all its energy. That way, you’d only have to charge your batteries for about 7 hours. Though of course, if you’ve built a Dyson sphere the idea of day and night becomes a little meaningless, so you probably don’t care about leap years any more.

So, given the choice…?

I think I’ll stick with 29th February, thanks.

[This post was brought to you using the power of WolframAlpha.com]